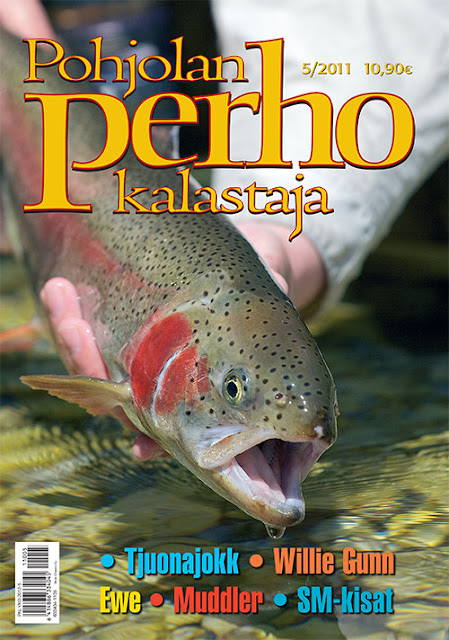 A new issue of Pohjolan Perhokalastaja magazine will be published during this week.
I hope that you all like the cover photo, which I have taken!
There is also a story about Muddler and some history about it, which I have also written.
If for some reason you aren't ordering this best Finnish fly-fishing magazine, please, fix it soon as possible!
Order it here!
- J. Inkinen - 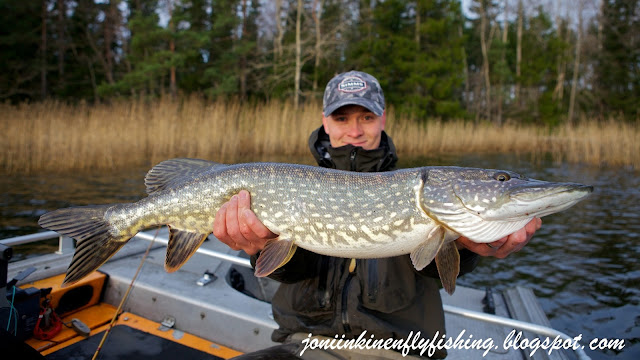 Some of the fishermen think pike is a rubbish fish, but for the pike freaks, a huge pike on fly line feels same as salmon or trout!

There is something special, something that fascinates on pike fishing.
The pikes hit can be like torpedo hit, it can be so huge. Also you always have a chance to get a massive size fish on and I think that's the thing that gets you hooked on this.
Unlike salmon, a huge pike can get even a big man tremble with fear!


Sometimes you have to fish from the surface, sometimes deep, slowly or quick, so there is many ways to fish.. Especially on windy days pike is usually deeper waters.

Pike fishing is not always easy. As you might know, the best time to fish pike is on cold and rough weather in spring or autumn. Also rainy, windy and cloudy days inspire this 'beast' to prey. 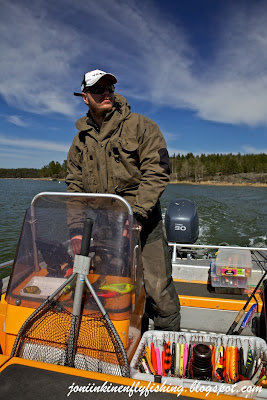 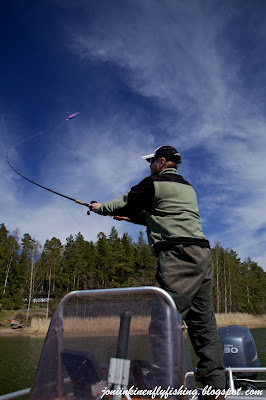 Pike fly tying is also a really nice hobby. Only limit is your imagination!
You have all kind of materials and colors to use. When some color is working well, it soon becomes your favorite.
However, one of the most important things is the figure and the size of your fly.
Especially at sea, the fly must be really BIG, even thirty centimeter long and fat, otherwise it's useless to even imagine of receiveing more than fresh air!
The situation is different on the lakes. I have received over meter pikes with less than twenty centimeter fly..
Here is some pictures of those: 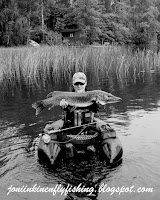 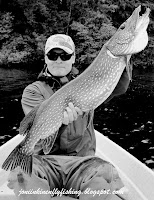 When should you fish for pike?

The best time is early morning, just when the sun rises. On this time fishes are often very active.
Also in the evening, about an hour before sunset is a great time to fish for big pikes!
Those times are usually the best times to fish pikes, but not always.. Personally I have received the biggest pikes middle of the day, when it had rained and was cloudy.

Remember also that the windy side of the beach is usually better!

It is interesting that a 10kg pike can eat 2kg size fish easily.
It has been found up to 6kg size dead pike, which has tried to swallow bigger pike than itself, so it is the real beast!


The best fishing trips are made by, of course, good friends and not so much by the amount of fish.
Thank you boys who are intolerant of me and my stories =)
Hopefully we can go fishing as soon as possible!

Fly fishing is a part of my life.
To me it's the best way to relax and just to focus on fishing and forget my hectic work.
Also photographing is close to my heart.
I try to save the greatest moments of my travels and trips into photos, just for you.
One picture is worth of thousand words, right?
Hopefully you will enjoy reading my stories, or just looking at the photos!
- Joni Inkinen, in 2012